At the IAA Commercial Vehicles 2016, trailer manufacturer Krone had connected the artistic design of a refrigerated trailer and auctioning it with a charity campaign for DocStop. Truck rental company BFS bought the vehicle - and thereby supported the European expansion of medical care for the professional driver.. 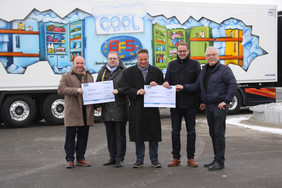 Kirchberg an der Jagst, March 1, 2017 - The "DocStop für Europäer" association, which helps professional drivers en route to find medical assistance, is delighted about a donation of € 10,000. The donation came from the truck rental company BFS Business Fleet Services GmbH and the trailer manufacturer Fahrzeugwerk Bernard Krone GmbH & Co. KG. The two managing directors of BFS, Hermann Stegmaier and Jan Plieninger, as well as the marketing manager of Krone, Ingo Lübs, handed over the checks at the head office of BFS in Kirchberg to the DocStop board members Joachim Fehrenkötter and Rainer Bernickel.

The "DocStop für Europäer" association has been supported by both BFS and Krone for some time. Krone and DocStop have been partnering since the founding of the association, a partnership with BFS will now follow. "The profession of the truck driver is arduous enough. We are convinced of the idea of making it as easy as possible for professional drivers to look for a doctor. Country borders can not play any role here", says BFS and Krone.

The donation results from an event within the past IAA. During the exhibition, Krone presented the creation of an impressive work of art on an extraordinary canvas, or more precisely a trailer. The visitors were offered the unique opportunity to follow the continuous progress of the work of art, which was created with the help of an airbrush technology, step by step. The completion of the vehicle was crowned by a festive auction, at which BFS was awarded the highest bidder.

The one-owner Krone Cool Liner in double-deck design is equipped with a Carrier Vector 1550 T cooling unit, a lifting axle and a 36-pallets box. The world-wide unique art vehicle is exclusively available to the rentalcustomers of BFS.